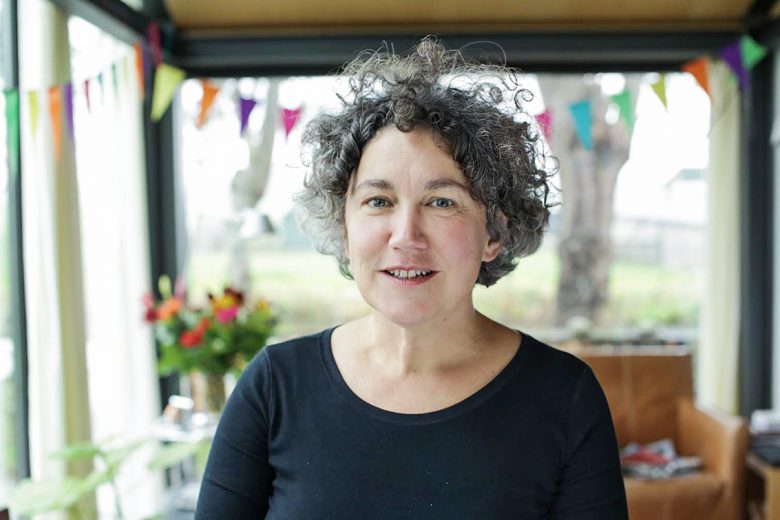 Sabine Käppler is a professional transposer: she transposes. Due to her doing, things continue to end up elsewhere, leaving their own biotopes.

This may entail that something is made of an entirely different material than usual. The molded face, for instance—not made of clay, but of bread—is maneuvered from the domain of sculpture into the kitchen; snowballs that, due to their porcelain constitution, move from the scene of wintry fun into the china cabinet; or a fan that appears to have been stitched together from the leaves it is actually meant to blow away.

Some of these transpositions are quite literal, however. The entire African continent has, on a map of the world, borrowed all of Greenland’s ice. An imaginary animal, sitting in a cage in the courtyard of a gallery, has left its—in itself weirdly spread out—territory. A polar bear emerges hitchhiking in South Africa.

By dragging everything off, and by changing the constitution of things, Käppler allows us newly to experience the things she takes in hand.

“The best one can do, is therefore to look at things anew, to go for a walk, or to stretch oneself out in the grass or under the trees, and start all over again…,” Francis Ponge once said. This became Sabine Käppler’s motto, and has it turned out to work. Text: Maarten de Reus

I was envious when I saw her cactus collages (Studies 2019). Cactuses clumped together into an oval. Huddled like frightened animals. Prickly and enchanting at the same time. I would have loved conceiving this three-dimensional collage. Yet, thinking back, I had already been envious of her earlier bread portraits. Sooner or later, we will all end up as a dough mask. Until then, dear reader or viewer, you too may feel a touch of envy at the sight of one or more of Sabine’s transpositions. Start with one of the golden stones (Transformed Buddhas). They breathe greatness and immeasurable wealth and yet lack the dead weight of possession. Pick it up and feel. Don’t try to grasp it. Sabine’s art is not there to be grasped. It is there to elicit different perspectives. Her Loops are also enviable. Little coagulated journeys, or are they mental leaps ? Art is always in the eye of the beholder. You get to determine the meaning and it may change before your eyes.
Sabine is currently focussing on bees, a long lasting love affair. She fills cardboard honeycomb with coloured wax crayons. Objects with the feel of wax. To be appreciated freestanding or hung on the wall. Sabine: “ The smell of beeswax, propolis and honey is simply unbelievable. Maybe I am just trying to find a shape to express it.” Search is innate to artists. Once seen, Sabine Käppler’s transpositions remain etched in your mind. They are pared back to the elemental, as if Sabine sees through things and translates the unfathomable. You cannot reach any higher.
Text: Jos Houweling, 2020

This website uses cookies to improve your experience while you navigate through the website. Out of these, the cookies that are categorized as necessary are stored on your browser as they are essential for the working of basic functionalities of the website. We also use third-party cookies that help us analyze and understand how you use this website. These cookies will be stored in your browser only with your consent. You also have the option to opt-out of these cookies. But opting out of some of these cookies may affect your browsing experience.
Necessary Always Enabled
Necessary cookies are absolutely essential for the website to function properly. This category only includes cookies that ensures basic functionalities and security features of the website. These cookies do not store any personal information.
Non-necessary
Any cookies that may not be particularly necessary for the website to function and is used specifically to collect user personal data via analytics, ads, other embedded contents are termed as non-necessary cookies. It is mandatory to procure user consent prior to running these cookies on your website.
SAVE & ACCEPT